Unless otherwise noted, all the text and maps on this page were excerpted from chapter 18 of Simon Wardley's Book[1]

Whilst all plans must adapt, that doesn’t mean we can’t scenario plan and prepare for possible outcomes. Let us take another example, in this case the self-driving car. In figure 241, I’ve described the automotive industry in mapping form. We start with the basic user need of getting from A to B. We then extend into route management (i.e. doing so quickly), comfort and affordability. We also include status – a car isn’t just about moving from A to B, it’s also about looking good whilst doing so. From this we extend into a pipeline of cars with some more commodity like, especially in terms of features. I call out a couple of discrete parts from entertainment to infotainment systems and we continue down the value chain itself. You might disagree with the components and their position but that’s the purpose of a map, to allow this form of challenge. 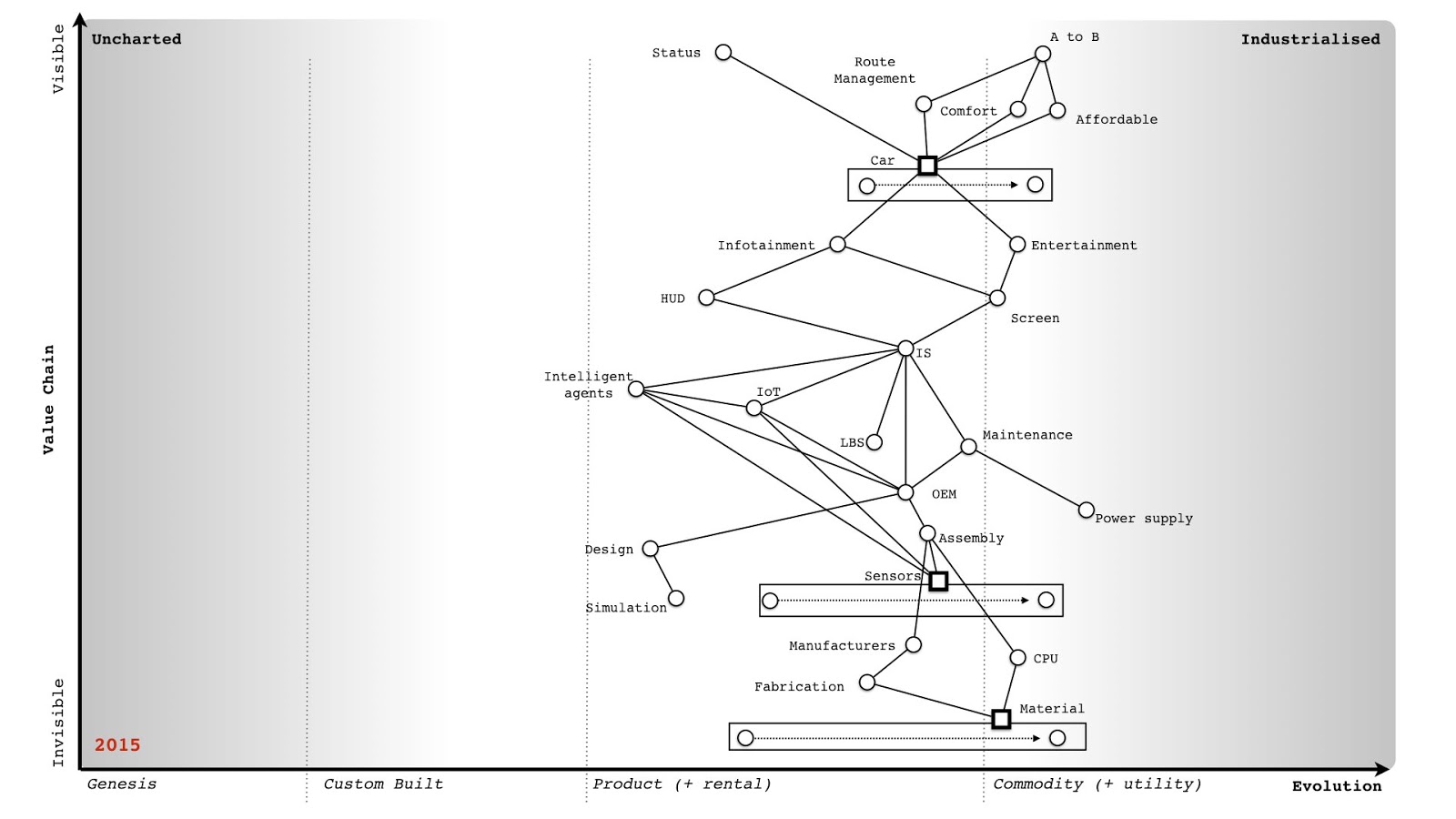 However, that is a map for today (or more specifically for 2015 when it was written). What we can now do is roll the map forward into the future. What emerges is a picture of self-driving cars (i.e. intelligent agents in all cars), an immersive experience (the Heads Up and Screen have been combined) and the vehicle itself becoming more commodity like, even potentially more utility like.

Hence you can think of a world in 2025 where increasingly we don’t own cars but pay for them on a utility basis. The cars are self-driving and increasingly immersive. The car that drives me to a meeting might have been the car that drives you to theatre last night. However, using this map we can also see some other connections which might not have been considered before. 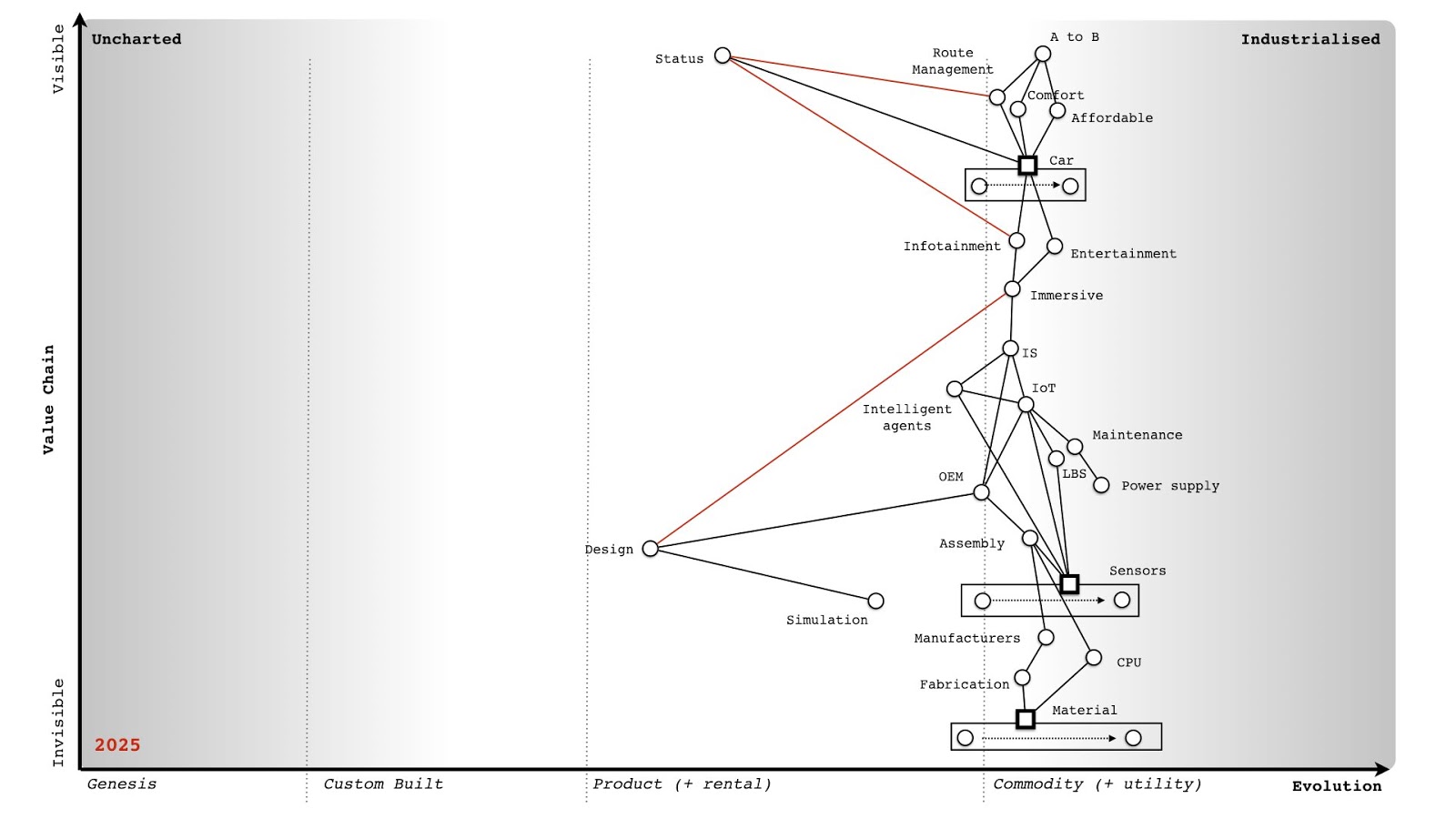 First is the rising importance of design in creating the immersive experience (shown as red connection line). Second is the issue of status and that immersive experience. If the cars are the same we still have that need of status to be met. One way to achieve this is to have digital subscription levels e.g. platinum, silver and bronze and to subtly alter the experience in immersion and both the look of the car depending upon who is currently occupying. A standard bronze member might get adverts whilst a platinum member would be provided to more exclusive content. But that doesn’t really push the concept of status. The third addition is a link (in red) between status and route management. If a platinum member needs a car then they should be higher priority. But more than this, if you need to go from A to B then whilst you’re driving (or more accurately being driven) then lower class members can pull over into the slower lane. With human drivers that isn’t going to happen but with self-driving vehicles then such privilege can be automated. Of course, there’d be reactions against this but any canny player can start with the argument of providing faster routes to emergency vehicles first (e.g. fire, ambulance) and once that has been established introduce more commercial priority. Later, this can be further reinforced by geo-fencing privilege to a point that vehicles won’t drive into geographies unless you’re of the right membership level.

Obviously, this has all sorts of knock on social effects and such reinforcement of privilege and the harm it could cause needs to be considered. Governments should scenario plan far into the future. However, the point of maps is not just help to discuss the obvious stuff e.g. the loss of licensing revenue to DVLA, the impacts to traffic signalling, the future banning of human drivers (who are in effect priced off the road due to insurance) or the impacts to car parks. The point of maps is to help us find that which we could prepare for. Of course, we can take this a step further. We’ve previously discussed the use of doctrine to compare organisations and the use of the peace, war and wonder cycles to identify points of change. In this case, we can take the automotive industry map rolled forward to 2025, add our weak signals for those points of war and try to determine what will rapidly be changing in the industry at that time. We can then look at the players in that market, try to identify opportunities to exploit or even looking at nation state gameplay.

In the case of the automotive industry, I’ve marked on the points of war that will be occurring (or have just occurred) and then added on the gameplay of China in that space. This is provided in figure 245. What it shows is that China is undergoing significant strategic investment in key parts of the value chain prior to these points of industrialization. It is also building a strong raw material supply chain gameplay by acquiring significant assets in this space. If you overlay the Chinese companies in the market and then run a similar exercise for the US then what emerges is quite surprising. Whilst many have assumed that this future will be dominated by US and Silicon Valley companies, it looks increasingly likely that the future of the self-driving car belongs to China. 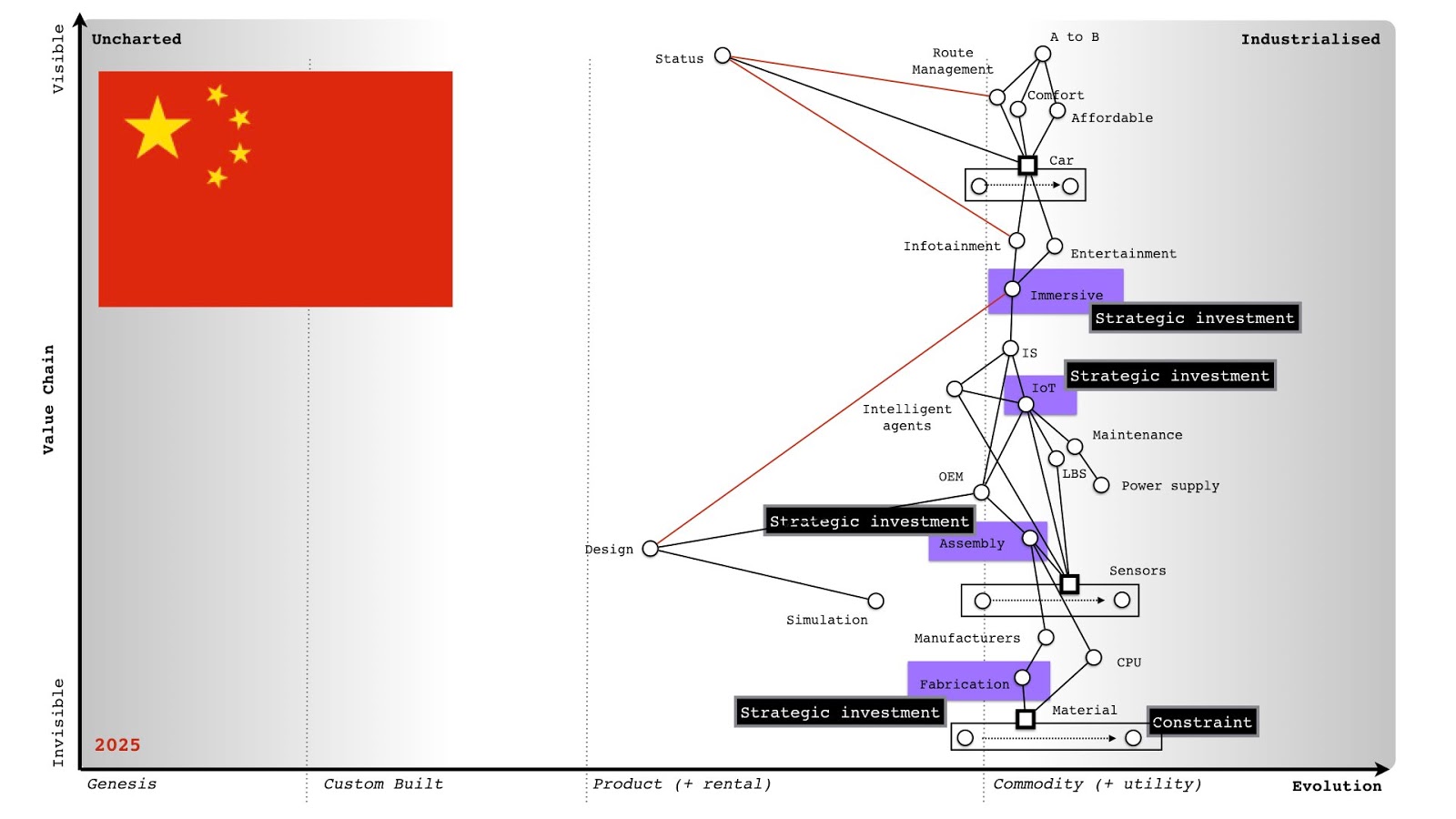